The Bread And Butter Of Resting Actors Bartending, Barista-ing, and Waiting tables is the staple temp work of the masses. It’s just so easy to pick up and drop. With hundreds and hundreds of restaurants around you couldn’t spit in London without hitting a “staff wanted” sign. I paid my way through Drama School working… 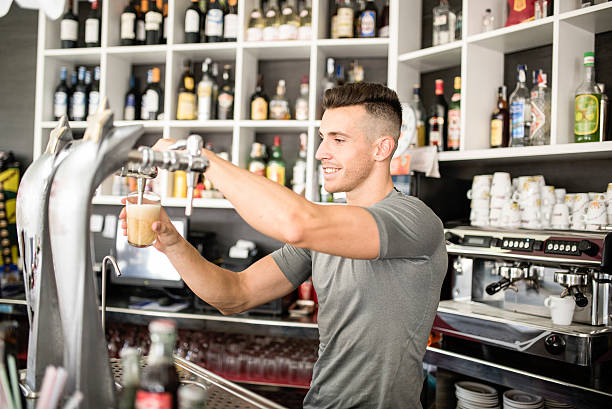 The Bread And Butter Of Resting Actors

Bartending, Barista-ing, and Waiting tables is the staple temp work of the masses.

It’s just so easy to pick up and drop. With hundreds and hundreds of restaurants around you couldn’t spit in London without hitting a “staff wanted” sign. I paid my way through Drama School working at a Wetherspoons and a Walkabout every night for 3 years.

Lets take a look at each of our 7 criteria and see where Bartending & Waiting stands up against Teaching from last week.

Remember the higher the score the lower the skill that is required and the easier it is to get started.

On the low end of skill, if you can use a till, pour a pint, and carry a tray you are pretty much good to go. Bartending is right at the very bottom of the skill pile here which is mostly why it is so attractive to get started in.

If you can count… you’re basically set. Being a great people person and having great banter can make the job more fun and a bit more rewarding but in most of the mid to low end bars tipping is non-existent.

Waiting is a little different because having the added skill of being great at customer service can actually make a substantial different to your earnings. The more awesome you are at your job the more likely you are to get a little cash tip at the end of the meal. This means being able to build rapport with your customer and make their experience rise above the norm of usual restaurant going. If you make your customer feel special, feel taken care of then in the short term they are more likely to tip you but in the long term they are more likely to come back.

The downside of such a low skill requirement is the pay for this type of work generally sucks.

You are lucky to get above minimum wage as a basic rate and most bar and restaurant  jobs actually advertise the rate of pay inclusive of tips to make it seem like you will walk away with more money.

Even at the highest level, I experienced a friend who was offered a job at one of London’s top 5 steak houses. We are talking £50-£100 a cut of beef here, and they were told the pay was £15 an hour. Sounds pretty great right?

Firstly that means not only am I never guaranteed an hourly rate above minimum wage BUT I also can’t keep my own tips!!! So in effect your extra hard work goes to bolster everyone else’s salary.

The earning potential for Bar & Waiting work is sort of just below average. Due to the rock bottom hourly rate being compensated for by tips and pretty consistent work shifts it claws its way back up the scale a bit but you have to work damn hard as a bartender or waiter to stay at the same level as you would on a bog standard day working promo.

The score here would have probably been higher except for the fact that tipping amounts vary greatly across the industry. Some waiters I know swear that their tips double their wage every month, which is all fine and dandy but you are the exception, not the rule.

As I’ve said before I think that generally speaking Actors actually overestimate the amount of flexibility they think they need.

Bartending and Waiting is in a solid middle ground where they tent to be flexible enough without risking the consistency of your shifts, unlike let’s say Promo work.

You will get weekly shifts which, if you’re at one place for a solid period of time will generally fall into a pattern that you can rely on to arrange stuff around.

However when you are rotad on to work on a particular day it becomes your responsibility to find yourself cover among your co-workers if you need to take it off. This means it can be inconvenient when something comes up last minute. You certainly can’t just call up on the day and say you won’t be coming in.

However if you work hard and play well with the team then if you need to leave for a job you generally stand a pretty good chance of being welcomed back on your return.

Bartending and waiting is tough.

The hours are unsocial which means at least half the time you will be working evenings, sometimes even late into the night at a bar.

The biggest problem that I had when I was working all the hours god gave at a bar, and the biggest problem I see most actors who do this type of work face is that your day times will be spent recovering from the night before.

You will be sleeping in late every day, too tired to go to the gym, too weary to spend the rest of your time doing anything to help you in your career.

I mean who wants to spend 9 – 5 sitting at a computer sending submissions, researching contacts only to then have to spend 6 – 1am rushing around a bar or restaurant every evening to then wake up the next day and do the whole thing over and over again.

It becomes very unrealistic very quickly. But if you don’t work 5 days a week then you won’t be bringing home enough money to pay the bills let alone have some money left over to actually enjoy your life or invest in yourself as an actor.

The consistency of this type of work is one of it’s major positives.

Most bars and restaurants are open from pretty early in the day to pretty late at night 6 or 7 days a week, and there are literally thousands of them across the city.

This is another major plus point, because staff turnover is so high the recruitment process is usually very short. You could hand your CV in to a bar today and be asked back tonight to start a trial shift and see if you’re a good fit.

And once you start you’ll see money in your account a week later in most cases, you might even get some cash in your pocket from tips.

If you’re looking for some  pretty quick cash this is certainly one of the best ways to do it but as a long term temping plan it usually involves way too much energy for not a lot of compensation and you would usually be better moving to something else quickly before you start getting burned out and find yourself being a full time bartender and a wannabe actor instead.

What Do You Think?

Have you worked in a bar or restaurant before? Does your experience match up with what I have said above?

Let us all know in the comments below.