The Ultimate Guide To Networking For Actors | Part 1

Networking for Actors is the most important skill you can learn to boost the success of your career, but be honest with yourself, you don’t have a clue where to start right? You know you need to identify the people who matter in the business, casting directors, agents, directors and you know you need to… 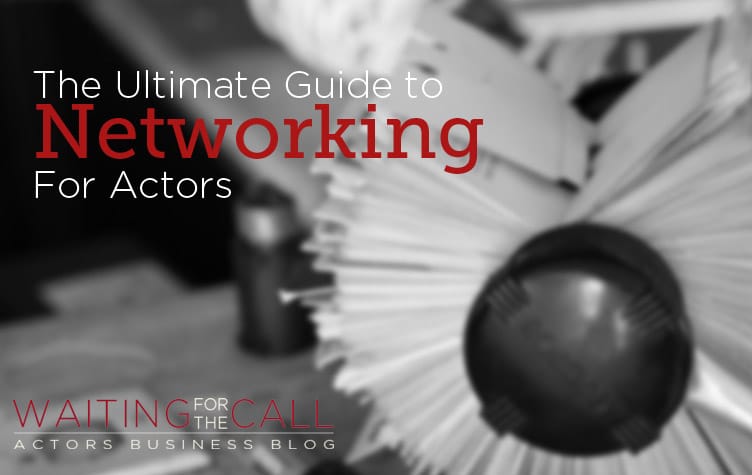 The Ultimate Guide To Networking For Actors | Part 1

Networking for Actors is the most important skill you can learn to boost the success of your career, but be honest with yourself, you don’t have a clue where to start right?

In this three part guide I am going to show you exactly how to easily identify and connect with the right people and grow your relationships with them to skyrocket your career to success.

Part 1 | Get Ready – we will dispel all the myths and discover what networking is really all about.

Part 2 | Get Set – you will discover the skills you need to identify and connect with the people that matter.

Part 3 | Go – you will begin apply these lessons in practical real life scenarios and learn how to extract every bit of potential value from your efforts.

Along with this guide there is a free PDF download with a full Action Plan with worksheets to fill out,  a resource to show you 5 Free Tools To Network Like A Master and a 30 Day Networking Challenge to take all this theory off the page and into the real world.

Networking For Actors Part 1 – Get Ready

Admit it. You spend more time on Facebook than you do on stage or behind a camera.

You follow people on Twitter and Instagram who seem to go from press night to press night, are friends with everybody and you are not-so-secretly jealous every time you see a photo of them out for drinks with yet another creative.How the hell do they do it?

Deep down inside you know the answer.

You know it but you’re too scared to even say the word because the very mention of it is like the final nail in the coffin of your career.

It begins with ‘N’ and ends with ‘etworking’. You know you should be ‘doing’ it but you haven’t the faintest idea where to start and don’t want to end up like one of those slimy, sleaze-ball, networkers with their cards and their elevator pitches and their sweaty palms, eughh.

Well let me tell you, you’re right about one thing. If you don’t start networking soon you might as well kiss goodbye to all of those dreams of success you’ve got.

But all is not lost. Together, we are going to dispel the myths, retrain your mind and learn a comprehensive action plan to turn you from a networking nobody into a Master Connector.

Networking Is Not Working

Why do you cringe at the very mention of the word Networking?

You feel like a complete sleaze-ball as soon as you put your business cards in your pocket and once your networking shoes have been greased on you can sense the shivers from the people you meet who feel like they are being used and abused. Deep down inside yourself you know you are doing something fundamentally wrong and you feel it with every slimy handshake you initiate.

Yet it is very obvious that some people know how to do it. They do it well and reap the benefits of being obviously good at it. Those shining lights that seem to photo-bomb every press night photo you look at, they are forever seeing their casting director friends for drinks and seem to always be five steps ahead of your information. What are those people doing differently and how can you learn to do it too.

The painful truth is a little hard to hear;

Everything you know about networking for Actors is wrong. You are a user and it’s all your fault.

Harsh, I know, but unfortunately true and until such time as you can learn to turn this around you are going to continue sliming everyone you meet.

The good news is, you’ve read this far, congratulations. Now that you’ve taken the first step in admitting you have a problem, it’s time for step two…

Self Help Is Self Sabotage

As you begin your journey to becoming a Master Networker we need to cover some basic ground first so I know we’re both singing from the same hymn sheet.

Networking is the act of building up your network, right? But what is a network and why is it so important? Well…

But you probably think “networking” is a skill that you learn by yourself and practice on your own that magically opens the otherwise closed doors of the acting world for you. Well, that’s the problem. Bad networking is exactly that.

The basic idea here is that you can’t do anything alone. You need people around you to help you get to where you want to go. You need a system of identifying people you don’t know yet who might be useful people to get to know. To turn those strangers into acquaintances you have to invite them to be part of your network, helping them out wherever you can and connecting those people that need your help to others in your network that have the help to give.

You can’t be expected to know everything and be able to provide everybody with everything that they need at the drop of a hat yourself, which is why the best Networkers are in fact the best Connectors; of information, of people, of companies.

So stop thinking about Networking. Erase that word from your vocabulary and stop trying to ‘do’ it.Instead start thinking about how you can help your friends and family connect with the information and people they need to succeed in their lives. Your own success is directly linked to the success of your network and everybody in it.

[bctt tweet=”Good networking is about giving, connecting your networking to what they need to succeed. “]

Where Are You Going

If you don’t know where you are going, any road will take you there.

Do you want to be a voice over artist or a feature film actor. How about a musical theatre singer or a Vegas showgirl. The butcher, the baker and the candlestick maker all have very different paths to success but how do you know which path to start down without knowing where it is you want to end up.

Goal setting is going to be the subject of a whole other post, it’s a broad subject that an awful lot of people get terribly wrong, almost as many as Networking. I’ve even been to coaching seminars from some of the top coaches in the industry who gave terrible advice on this subject. It is hugely important for every aspect of an actor’s career to have clear actionable goals and networking is no different.

[bctt tweet=”If you don’t know where you’re going, any road will take you there.”]

Once you have clear goals set and specific people in mind to connect with you can begin reaching out to your current network in an effective and strategic way to help you take the next steps in achieving your goals. Now it’s time to get down to the nitty-gritty, the techniques and strategies you can use to identify, connect and grow your relationships…

Keep your eye out for part 2 of this guide which will be published right here next week. In the mean time don’t forget to Download Your Free PDF Networking Action Plan and get started taking your career back into your own hands.

Leave a comment below with one of your goals and I will help you make it S.M.A.R.T. to give you a better chance of achieving it this year.