Who’s Who? (And Why Should You Care!)

Let’s face it. No man is an island. Although some Actors think they are the centre of the known universe the simple fact is – you couldn’t be an Actor without other people. Sounds obvious, right? But who are these other people you ask?  Who’s who, and why should you care? Agents An Agent can… 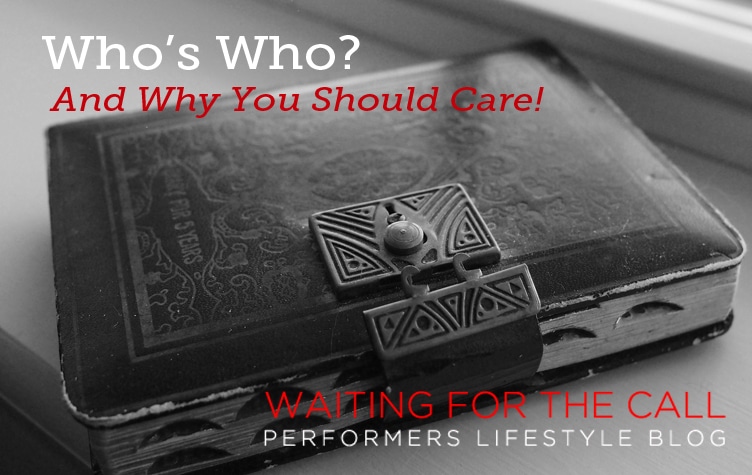 Who’s Who? (And Why Should You Care!)

Let’s face it. No man is an island.

Although some Actors think they are the centre of the known universe the simple fact is – you couldn’t be an Actor without other people.

Sounds obvious, right? But who are these other people you ask?  Who’s who, and why should you care?

An Agent can be part of an Agency which will have a number of people looking after the “Books” which is like a list of all the “Clients” (Actors) that they manage, or they can work alone or with a number of assistants.

An Agent is many things, they act as a manager for your professional affairs, booking you for castings, negotiating contracts and deals when you get work but most importantly they are the key to providing the link between you and the Casting Directors.

A good Agent will have strong relationships with a number of Casting Directors so that they can be trusted to submit appropriate Actors for a casting.

Most good agents will be part of the “PMA” ( personal managers association) which is a guild they can join indicating their quality, but some very good boutique (smaller) agents will not be which is why researching agencies before looking for representation is so important.

There are two very important things to remember about Agents;

If Agents are the Keys to getting seen for work, then Casting Directors (CD) are the doors!

I would even go as far as to say that CDs are the most important people in the industry. They go through all of the submissions for a casting and decide who gets to actually be seen by the panel. They often sit on the panel themselves and inform the rest of the members about you before/after you enter the room.

If you are in a CDs good books and always perform well in their castings then they will call you back again and again for shows they are casting.

They often work in associations that cast a broad range of shows or productions for one company. Some larger theatres will have a casting department in house.

Similar to Agents, CDs can be part of the Casting Directors Guild (CDG) which is also an online directory, similar to spotlight for CDs, This is also a great way to research who the big names are in the casting world. A couple of important points;

Directors are the artistic decision makers of a production.

While most performers know what they do inside the rehearsal room it is worth remembering that these decisions begin a long time before you even get there. They are often the first member of the creative team to be chosen and then everyone else is brought on board with their input.

Where you need to be most concerned though, is the casting process. The director often decides what type of actor they want for each of the roles, to fit in with their vision for the production, so although you may think you are perfect for a role, they might have a completely different idea of what they want in their head and so you may be seen for a totally different part, or not at all.

They formulate the casting breakdowns with help from the casting director and are usually the most important decision maker that you need to impress on the panel (other than the maybe the musical director of a musical).

If you work well with a director in the rehearsal room and casting room then they will remember what a good time they had with you and how much of a professional you were, conversely, if you become a pain in their backside then news will travel fast – first to the casting director, then to your agent and soon your diva strop over imported Evian mineral water will become industry gossip and no one will want to work with you again!

Similar to Directors, Musical Directors are the decision makers of the Musical elements of a production. Most commonly actors who sing but also actors who play instruments (actor-musos) fall under their direction.

Again, most musically inclined performers know what the MD does during the rehearsal process but when casting a musical the MD is one of, if not the most important decision maker. They will have an idea in their head of what they want each character to sound like, as a director will know what they want them to look (and act) like.

They will want to see you demonstrate your technical ability first and foremost, so they know you can actually sing/play the part, but will also be looking for you to bring elements of “you” to the role (as the director will) and then they will decide if that fits with their creative vision.

Often the Director and MD will have to compromise on what they want because their preferences of actor are not the same – The director sees a stellar performance from Actor A but the MD doesn’t think their voice is up to the role and vice-versa.

I just want to touch on choreographers as for the many dancers (and often actors) among you they are the first port of call when it comes to the casting process, once you’re in the room.

Similar to Directors and MD’s they will have a vision for the movement of a show whether its hip hop/street style in Jesus Christ Superstar, tap for Book Of Mormon or the infamous Top Hat. More often than not there will be a dance call first, especially for a dance heavy show, and if you are not prepared then they can often feel ruthless.

But again, if you work hard for them and show you have the skill and the professionalism they operate no differently for their discipline than the MD for theirs.

Producers are always a bit of a grey area for performers as they do many different things and their relationship to a production can differ greatly from production to production and show to show.

Essentially, the Producer (of which there is seldom only one!) holds the purse strings to a production. They invest capital into an idea and a creative team that they think will make their money back.

If they trust the team/the venue then often they will have a very hands off role but more and more lately they want to have a say in the decisions of what gets done with their money.

With regards to the casting process, their primary focus is “bums on seats” – how many people are actually going to open their wallets to see this production.

While we hope that the quality of the production and the talent of the performers is enough to draw the crowds, in the age of Big Brother, TOWIE and the countless reality TV talent shows it is a much safer bet for the producer to get “names” onto the billboards.

This, all too often, results in a producer pulling rank on a casting decision to protect their pocket book. Producers know that more people would be willing to pay to see Spencer from Made In Chelsea make a fool of himself as Fiyero than any one of the myriad talented, trained actors out there, perfect for the part. (and no, that would NOT be a good idea)

I can’t pretend that this is a comprehensive list of everyone you will meet in the industry but too much information is often just as bad as not enough. If you can grasp the relationship that each of these major players has with you and your career path then you will be doing very well.

Anything I’ve left out? Let me know in the comments below!